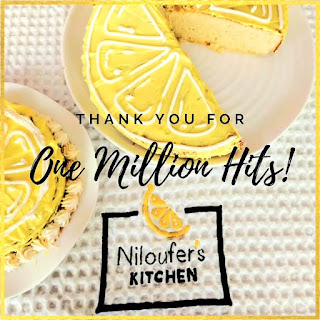 Born and raised in Karachi, Pakistan, my love for food, combined with extensive world travel from a young age, inspired me to experiment with world cuisines. At the age of 17, I taught my first cooking class. Loving the opportunity to meet new people who share my passion for food, I went on to teach many, many more cooking classes in Dubai, the United Kingdom, and Canada—where I have now lived for the past 21 years.

Growing up in a foodie family, my love and passion for food was natural. As a self-taught chef and culinary teacher, I have authored three cookbooks on Parsi food and won 4 Gourmand awards. I have also got 10  online e-books on various cuisines from around the world.

Decades of teaching prompted me to start my blog in November 2013, and now www.nilouferskitchen.com awaits its millionth hit.

Food photography and food journalism have allowed me to share my thoughts with the rest of the world. I've had numerous articles published in magazines, journals, and newspapers, including Delicious Magazine, The Fezana Journal, Hamazor, The Huffington Post, The Parsiana, Jam e Jamshed, Times of India, Parsi Times, The Howard County Community Library, and Chehreh Nama California.

My appearances as a guest chef at Le Cordon Bleu in London, on the New Hampshire television show The Cooks Cook, and, most recently, on The Voice of Canada have all been professional highlights for me. This, along with my participation in food-related programmes as a moderator and demonstrator for The Gourmet Planet Delhi, The WZCC Bangalore, Pune, and Delhi, ZANC and ZAMWI. has been a lot of fun. I am honoured to be one of only eight women worldwide chosen to represent the "Preservation of Parsi Zoroastrian Heritage-Campaigns and Conferences International" over the last century. A  joint project taken on by PaRzoR and UNESCO.

My mantra is #revivinganancientcuisine one recipe at a time, and I hope to put Parsi cuisine on the culinary map globally while travelling and photographing food.

The Art of Parsi Cooking; reviving an ancient cuisine
The World of Parsi Cooking: Food Across Borders
The Vegetarian Parsi, inspired by tradition
Posted by Niloufer's Kitchen at 10:11