The Medieval Magazine writes about The Parsis: Community through cuisine in their January 2020 issue. James Blake Wiener interviews Niloufer Mavalvala.

Why the cookbook of choice for 2019 is 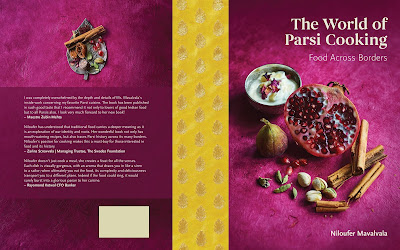 Parsi food is both simple and healthy.
It is often said that there is a food for every occasion and an occasion for every food!

It has been enthusiastically adopted and adapted, creating a distinct cuisine that brings together Gujarati, Maharashtrian, Persian and even British flavors. Stews and khoresh with the ample use of dried fruits reflect our Persian roots, the extensive inclusion of seafood comes from living in key port cities like Bombay and Karachi and the extremely sweet tooth is only increased with the love of puddings and custards from the British.

This cuisine is a familial one, accessible by all home cooks – experienced or not. This cuisine is not particularly meant for fine dining restaurants; it is about home and hearth.
My new cookbook The World of Parsi Cooking: Food Across Borders is precisely to showcase that. It best portrays seasonal cooking, food sustainability and minimal wastage all of which is encouraged in our way of life. Perhaps the chapter Mamaiji nu Pinjroo (Grandmas Larder) which emphasises all of the above.


And look what some of the readers have to say about it. 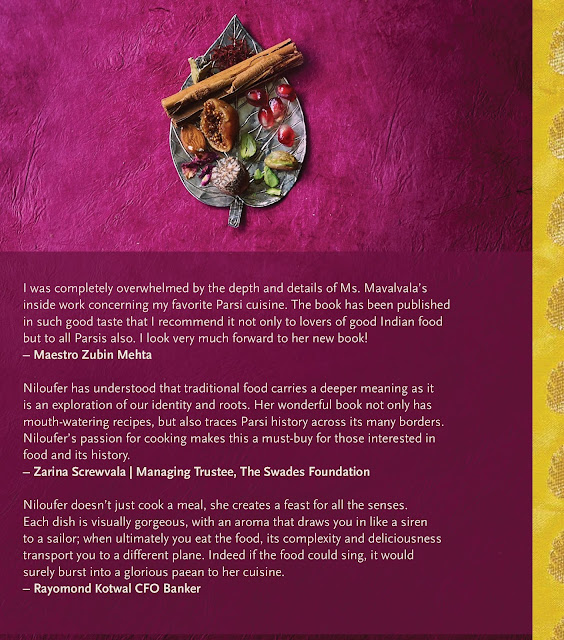 The World of Parsi Cooking: Food Across Borders 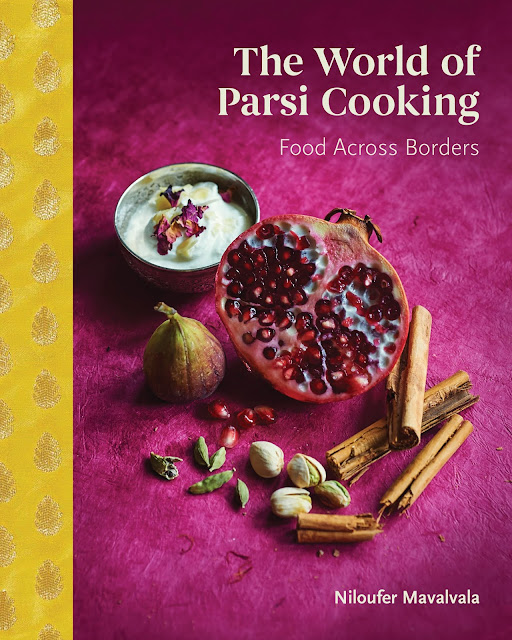 Introduction to The World of Parsi Cooking: Food Across Borders

“I am neither of the East nor of the West, no boundaries exist within my breast.” ~ Rumi

Deep, rich and ancient is what best describes The World of Parsi Cooking. It has been over 2,500 years since this cuisine was born, and it has journeyed across the borders of Ancient Persia, through Gujarat, Maharashtra and many regions of India into Pakistan, Bangladesh and, much, much later, beyond into the UK, Australia, Canada, USA and the world at large.

Parsi Cooking, is really all about fresh and simple ingredients with an emphasis on healthy spices. Thus, our food predates by centuries, the current food trends of organic and local eating, so fashionable in the Western culinary world today!

There are several reasons cookbooks are created. This one is one for the records. It is time for this great cuisine to be shared among the world and what better than sharing a family’s treasure trove of recipes; tried, tested and praised over the past two hundred years. I have written this book with the hope that it will be timeless and used in perpetuity. Created with stunning colourful pictures, it is a promise to promote and entice not only our own children and grandchildren but to share it with everyone interested in food.  While each recipe has ancient roots, gradual changes and adaptations have been included while ensuring the authentic flavours are bold and maintained. With the importance of preserving what continues to be a core part of our very existence, I present this cookbook - almost an anthology, to you with great gusto.

Pictures have been professionally taken by William Reavell , my teacher and photographer  and who is based in the UK and myself. Each recipe has been tried and tested to perfection . Old classics like Keri Kanda and Vengna nu Bharat are included. Also favourites like Rus Chawal, Sua Pak, Badam Pak and Gharab nu Achar are in this cookbook. Simple foods like Jhinga ni Khichri and egg-less Ravo, as well as Khekra ni Curry are part of the 51 recipes.

Finally the cookbook The Art of Parsi Cooking; reviving an ancient cusine is here to
pre-order and purchase.


The Big Launch as it unfolds in pictures! 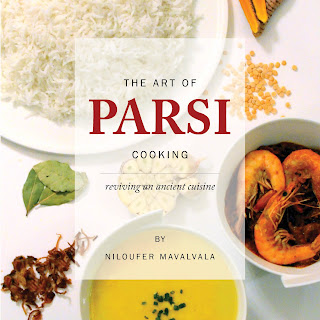 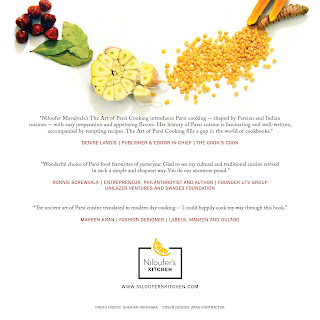 About the book on the publisher, Austin Macauley's Website

The magazine The Cook's Cook gives me a spotlight.

An article reviewing the book in Al-Arabiya News

The magazine The Cook's Cook has featured yet another article from Niloufer's Kitchen. It is all about the healthy seed Moringa.

While Chaat Magazine from the UK also invited Niloufer's Kitchen to publish a favourite recipe from its collection of Parsi Foods. Amenu of khichri kudhi and kheema followed by the Khopra Pak was featured with brilliant pictures and a short write up about "Who is Niloufer".

Spain has some incridebly tranquil islands to enjoy.

Travel to Italy to enjoy these amazing sites and sounds of Firenze.


The festival of Yalda is a rather interesting old Persian tradition. Niloufer's Kitchen is a proud participant in this Fezana Journal that has done an issue related to this. The recipes contributed for them are now on the blog to share and enjoy! Links below.

Shirini Panir    A  healthy sweet dish with fresh fruit.
Farsi Chole    A dip made from chickpeas and  roasted eggplant


The latest blog post in Huffington Post is now out and about A Celebration to remember a milestone event I helped organise in the community. 700 persons attended and it has gone viral worldwide within the Zoroastrian Community.

Huffington Post carries my second article about a whirlwind eating journey in the romantically beautiful city of Florence. Read all about my article Mangiare a Firenze, in English of course by simply clicking here How to eat in Florence

The Huffington Post Bloggers club has just accepted me. You can read the article by clicking on The French In My Food I do hope you enjoy it. The idea of having a scrap book started much later when I moved to Dubai. I was surrounded by people who I did not know and it was a great way to keep in touch with those who wished to befriend me. So I used to leave this book for them to write in after we had eaten generally sharing whatever we prepared that day for my cooking class. It worked well and now am glad I did as it makes for happy days relived whenever I want to!

Here I would like to share some of the pages, although I have photographed it in this way to keep peoples privacy private! For that I must apologise to you all in advance but, it is the right thing to do.

If you're looking for a passionate champion of Parsi Food, particularly in North America and the UK; if you are looking for a woman who has made it her mission to educate and inform not just everyone else, but in particular children of the Parsi diaspora about the rich cultural history of our Parsi bhonu - Niloufer Mavalvala is that person.

“While living in the East and surrounded by all the familiar things that give us comfort (e.g. colonies and agiaries), so much can be taken for granted. But gradually moving to Canada, being further from family and childhood friends, created a need to dig deep and find the gratitude for everything that our religion and culture gives us.”

Like most bawas, she has an innate passion for food and cooking and eating; and delights in the joy that cooking and eating together can bring. But more importantly, she is a proud Parsi who wants to preserve traditional recipes that our grannies took pride in making. Recipes that, if not documented, will be lost to the sands of time. Long before seasonal, locally grown, ethical, clean eating were buzz words, our mamaijis and bapaijis were living that way and cooking that way, all the time!

While observing other Parsi families in the West, she realised that there is an entire generation here unaware of Parsi food - its history, heritage and culture. They may never have seen certain Parsi delicacies, let alone taste them or understand why they are eaten - Niloufer's cooking classes and many books - serve to educate and instill confidence in our absolutely unique food and eating culture, which is neither Indian nor Persian, but a beautiful mix of so many influences, strong enough to stand on its own and be proud of it. “My resolve is stronger than ever to preserve, protect and help appreciate our rich past through my cooking, teaching, and writing. I hope to give everyone an invitation to taste old world goodies that we grew up eating in our grandmothers home”.

Ultimately, what makes Niloufer's message special is that she wants ours and the next generation of Bawas to be confident and take pride in our Parsi panu and our Parsi Bhonu - let us sing from the roof tops not just about Curry Chawal and Dhansak (which BTW she loves!) and Sali Boti, but Murrabbas and Bafaats and Suva Paaks and Maleedos. So, now when your friends talk about Turmeric Lattes and Energy Balls made with nuts and ghee – tell them that your mamaiji made you drink harad nu doodh every time you fell ill or insisted you eat Vasanu to keep you warm in the winter months – long before any foodie mag, celebrity nutritionist or chef told you to! Because if we don’t champion our Parsi bhonu with confidence, who else will?

Note: The New Book was published and released in July of 2019. It has now won 3 awards and exhibited at the Noble Alfred House in Sweden in Autumn of 2020 for 4 months among the best of the best cookbooks published in the past 25 years.

You can check out some of the same recipes at Niloufer's Kitchen: Quick and Easy 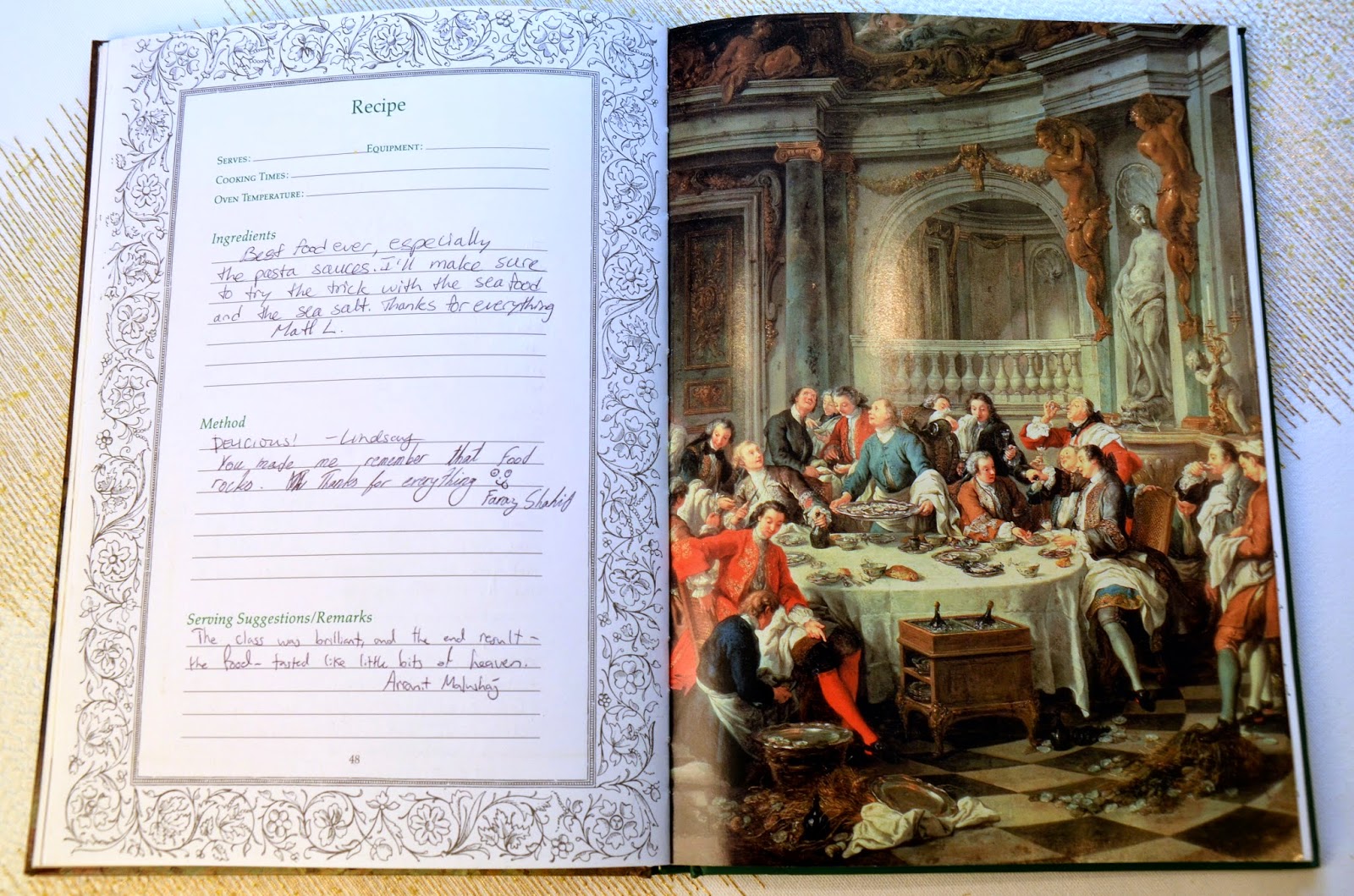 Isn't a table full of excited people awaiting a feast the best feeling ever?
Happy Cooking and Eating!

My publication in the Hamazor Magazine on how food connects cultures despite geographical divides over the centuries. Here I am linking our love for Persian Cuisine intertwined with Indian Cuisine commonly referred to as Parsi Cuisine.
Hamazor is a publication of the World Zoroastrian Organisation and archived at the British Museum in London, UK. 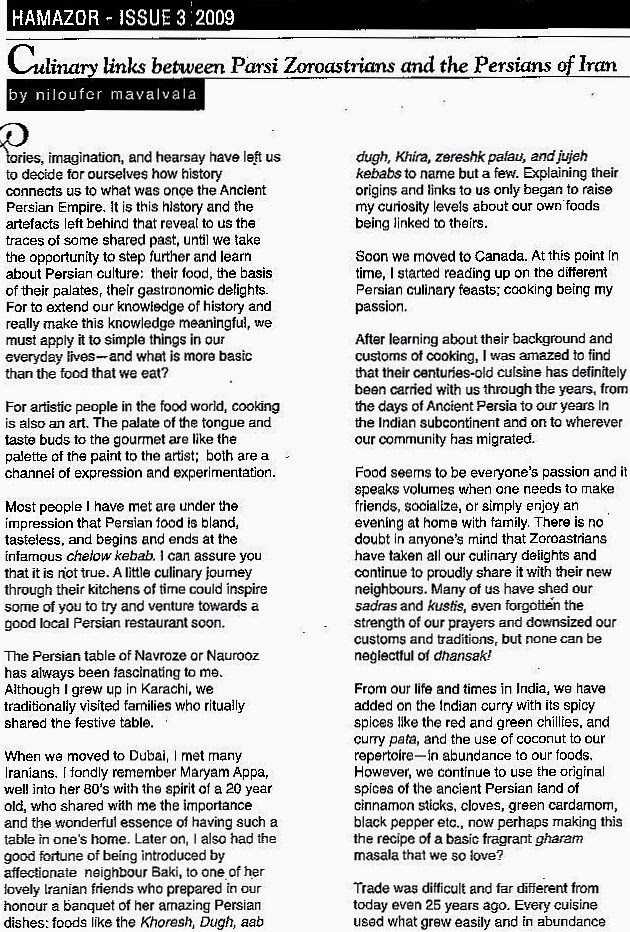 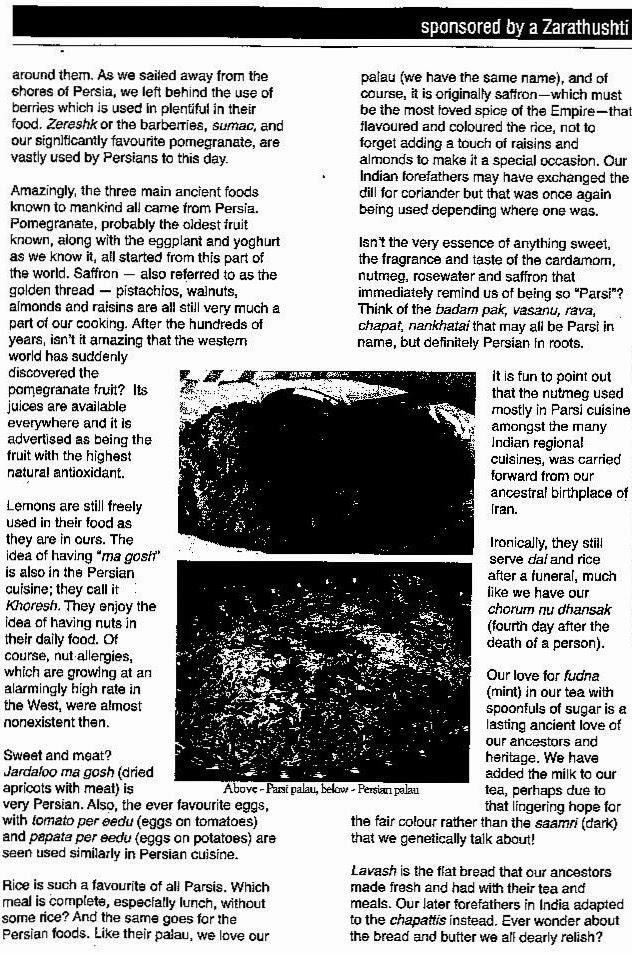 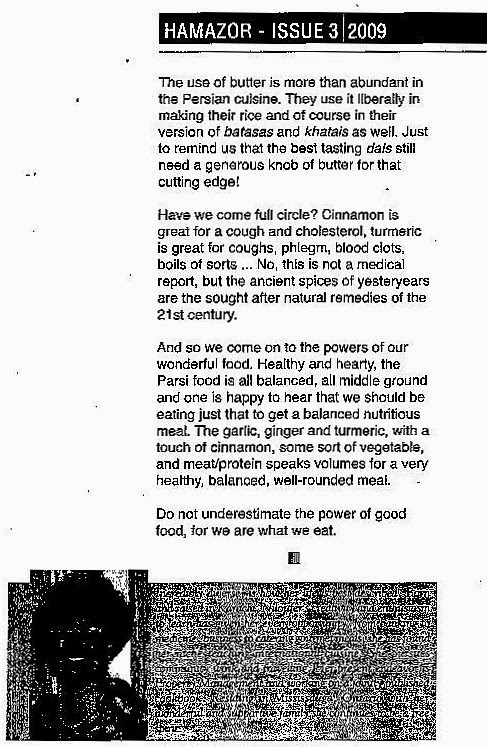 My publication on the love and art of  chutneys and achars  in the Parsi Cuisine. This was published in Hamazor magazine in 2013-issue 1. Hamazor is a publication of the World Zoroastrian Organisation and archived in the British Museum in London, UK. 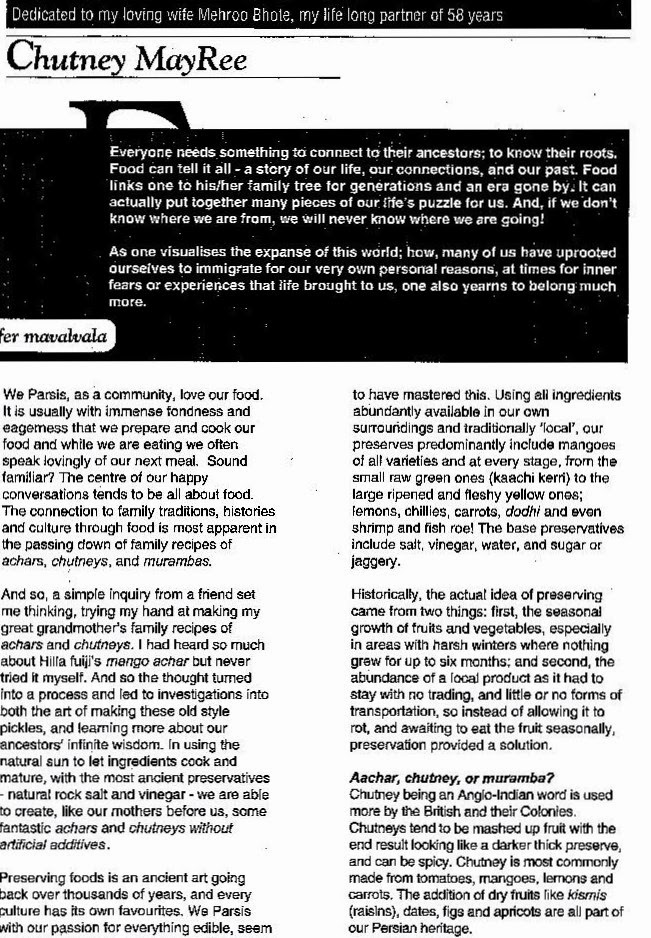 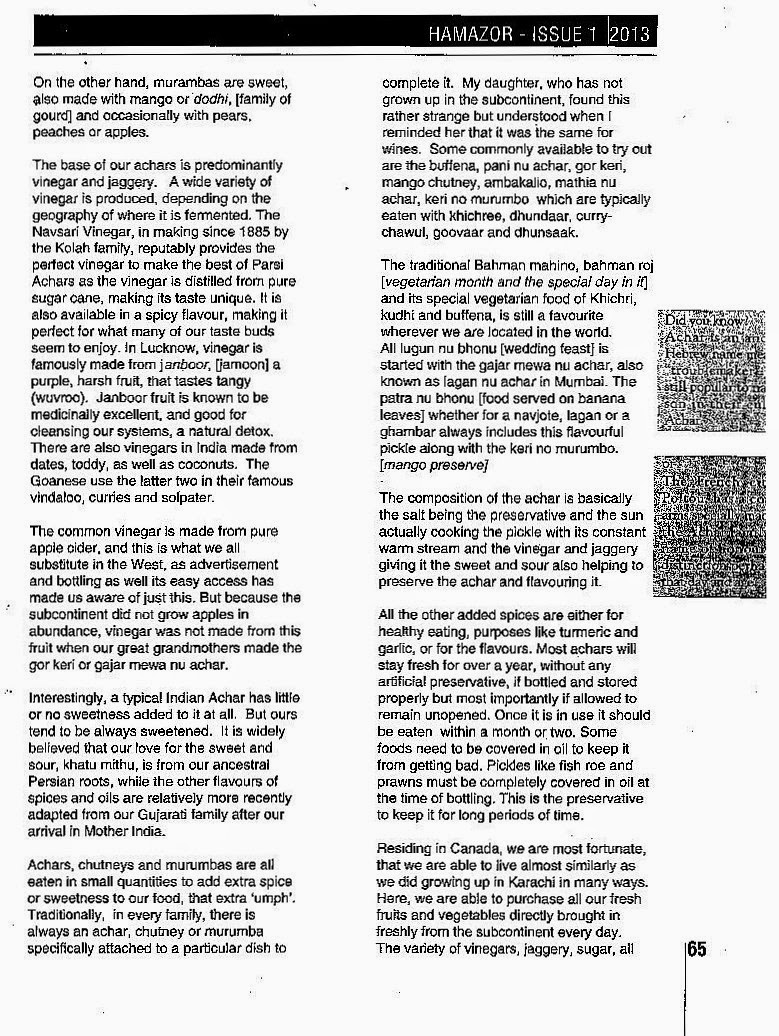