Corn; The Grain Of The Aztecs

Corn on the cob is popular at fairs and melas all over the world. I remember the street food that vendors freshly charcoaled on their makeshift fires. Slathering it all over with a touch of spice and salt with a half-cut lime!! Boiled, charcoaled, grilled, steamed, it all tastes good.
The corn, which is also referred to as "maize," was believed to have been first farmed in Mexico. It is a grain as old as the Aztecs. The corn is used to make flour and oil. Also sold in tin cans as kernels or creamed corn, it is included in candy and corn syrup. It is used as a feed to graze cattle and in commercial products such as scotch tape and making boxes. Puddings, desserts, popcorn, corn soup, salads, stews, rice, risotto, tamales, all use some form of corn. Tortillas, bread, and muffins are commonly made of corn. A versatile agricultural product. 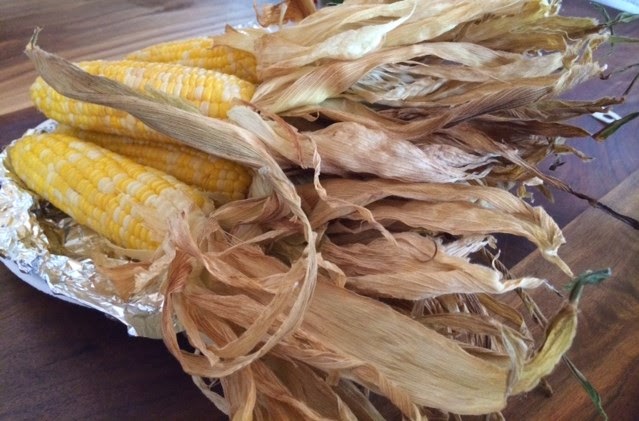 Depending on how ripe or raw the ear of corn is picked, the kernels can be sweet and milky or hard and starchy. We generally buy it to eat when it is young, while the starchy ones are used for grinding into flour, corn flour. In South America, kernels of corn are cooked in oil to plump up and double in size to eat as an appetiser called cancha.
The ear of corn is generally tightly wrapped in green leaves called the husk, and there are fine silk-like threads, or the pistillate. Husking or shucking corn is generally done by hand where all of the outer layers are removed before cooking it. These husks are also commonly used to wrap tamales in, besides other uses.
Corn is found in a variety of colours like white, yellow, purple-blue and red. It is a healthy snack and contains manganese, vitamin B, phosphorous, and fibre.
Photo Courtesy Niloufer Mavalvala

Posted by Niloufer's Kitchen at 18:49

Email ThisBlogThis!Share to TwitterShare to FacebookShare to Pinterest
Labels: Corn