The significance of using brown butter can never be overestimated. It adds to the colour, texture, and enhances the flavour of the food. The process of preparing the brown butter creates a nutty caramelisation, transforming the solids into perfect bites of salty goodness.
For centuries, Parsi food has included this method of butter in its delicacies, as have other regions of the old world like Syria, Iraq, Iran etc. Daar ni pori, badam pak, and mava nu cake are the common ones that use brown butter in their recipes. Ghee is often replaced with brown butter as an alternate.
It is tried and tested to be used as a simple "sauce" over ravioli, white fish, bread and butter pudding, banana bread, fried steak and eggs in or preparing a vegetarian rice palau. Topping it as a tarka on dal or lentils is commonplace. Beurre noisette (literal translation being hazelnut butter) is the French way of including brown butter in their pastry and cakes. They are often known to use it as a savoury sauce over omelettes, chicken, fish, pasta, and winter vegetables.
It can be safely stored in the refrigerator for a month. 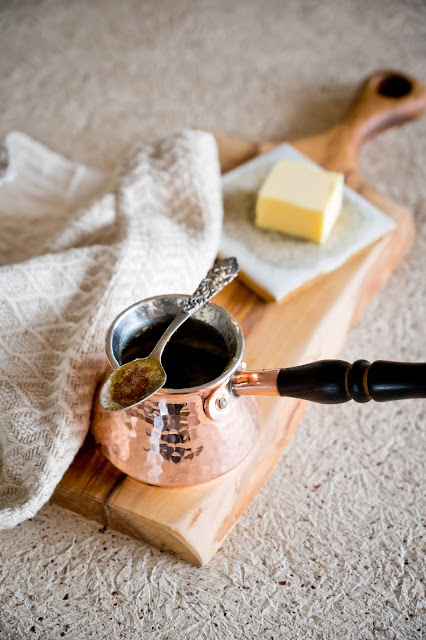 250 gm/ 8 oz salted butter
To make brown butter simply simmer the butter until it separates and the solids are a golden brown.
The solids will separate and accumulate at the bottom of the pan. Use the liquid and the solids both.
You may find the evaporation leaves you with a little less brown butter than a cupful.

Posted by Niloufer's Kitchen at 14:51