Soups, stocks, and broths are possibly one of the oldest forms of cooked food known to humankind. Warfare and poverty taught humans to boil every piece of the animal; a way to use the bones that could not be eaten or wasted; and thus the fine art of gourmet soup evolved over time!

It was also a way to feed the sick and infirm. Each region of the world can now boast of having its very own special soup, typically dependent on the local produce. But that came about only in the last century. Soup was not served in restaurants until the 18th century. Paris initiated this bold move, which caught on slowly but surely.
Today, soup is made from almost anything that is edible; it can be served hot or cold, chunky or smooth, spicy or sweet, creamy or clear. It continues to be popular. Many enjoy the combination of potato and leek. The sweetness of the leeks achieved by the slow sautéing and patient sweating of this vegetable caramelises the goodness of this often overlooked vegetable. While a good stock and broth will determine the finished product, you may add a few more ingredients. 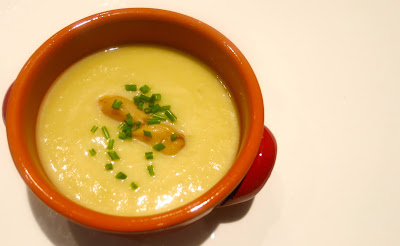 A roasted garlic and potato soup with leeks

Warm the oil and butter. Saute the leeks, allowing them to simmer and caramelise. Add a pinch of sugar and salt to maximise the flavours. Add the  garlic, celery, and onion, cook for another 10 minutes, then add the potatoes.  Add the stock or broth of your choice and bring it to a rolling boil. Cover the pot and lower the heat. Simmer for 45 minutes.

With an immersion blender, carefully pulverise the soup. Taste it for seasoning.

Add salt and pepper as needed.

Posted by Niloufer's Kitchen at 10:48

Email ThisBlogThis!Share to TwitterShare to FacebookShare to Pinterest
Labels: Potato and Leek Soup