The Persian New Year is a much-awaited time of the year. The advent of spring means better weather for most in the Northern Hemisphere and beautiful flowers to smell and admire.

Growing up, Navroze in Karachi meant a set of new clothes, a holiday from school, prayers at the fire temple, and then visits to the family elders. We got to eat sweets all day; received a bit of cash in a parika from grandparents and loving aunts—always with shiny, crisp, new notes straight out of the bank stuffed in a white envelope with bhali duas (good wishes) always written with a red pen. It was never about the money, but about the excitement of having something to look forward to.

While we ate traditional food for lunch as a family, we generally ate out for dinner. As years go by, every year I learn more about Navroze-our ancient traditions, heritage, and culture that we knew very little about when younger. Through my recent interest in researching commonalities between Persian and Parsi food, I found that one of the traditional foods Iranians eat over Navroze is a Mahi Polo—rice and fish.

Here I have shared my version of this dish, which I prepared for my mother one afternoon. I enjoyed it very much. I think she did too. 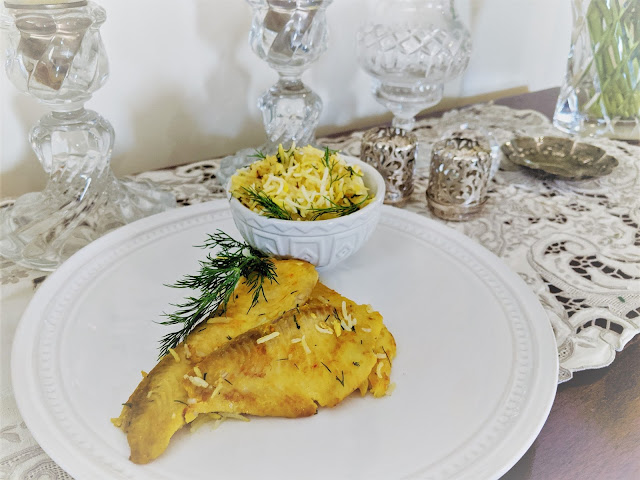 Boil a cup of rice in salted water. Once cooked, drain in a colander and toss with the butter and dill.

In a deep skillet, heat the oil and fry the fish, turning it once.

Spread the rice all over the fish. Give the pan a shake to spread the rice evenly. To seal, cover tightly. Allow for a 10-minute simmer before turning off the heat. Let it rest for a few minutes and serve.

Cooking your rice in broth, stock or homemade buttermilk-chaas (the whey from the paneer recipe on page xx) adds to the flavour.

Add a squeeze of orange juice just after the fish is cooked to further brighten up the dish.

While this dish has no gravy, it is a good idea to serve it with raita, or the Persian version of the same, made with yoghurt, cucumber, walnut, raisin, red onion, and sumac.

Posted by Niloufer's Kitchen at 20:24

Email ThisBlogThis!Share to TwitterShare to FacebookShare to Pinterest
Labels: rice and fish