A classic from the 1800's in France its origins are debated. I would like to believe the most romantic story - of the one where chef Henri Charpentier erroneously lit up the liquor while he was about to serve the Prince of Wales. Left with no choice but to serve the dessert he proceeded with confidence to present this "flambéed" dish! later on when he was asked the name of this delicacy he said Crepes Princess. A young girl Suzette seated at the table requested the Prince to rename it after her instead - hence the creation of Crêpes Suzette. The one questionable fact in the story remains unanswered - Henri was 14 years old at this time, was he serving the Prince?

This dish remains a classic. Not much has changed over the years in its ingredients.

Growing up we had it on special occasions and continue to enjoy it to this day. 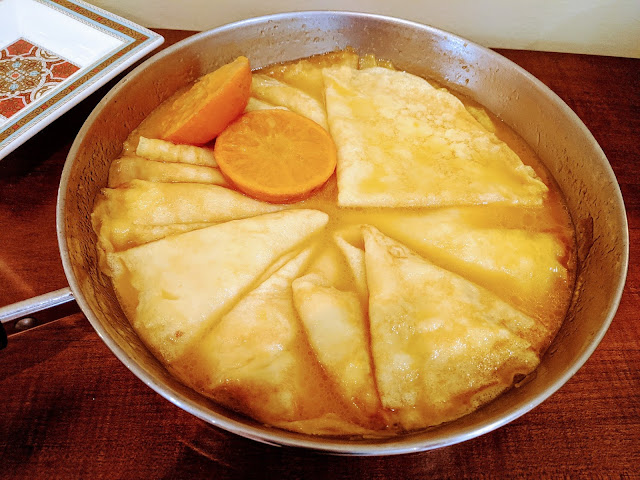 2 eggs - well beaten to a froth

Beat the eggs first and keep aside.

Mix the rest of the ingredients until smooth and add the eggs to it. Stir and let it rest for 30 minutes to thicken.

Heat a skillet. Pour 1/10th of the batter. Swirl the pan and allow it to cook for 40 seconds. Flip. Wait for 30 seconds and flip it over on a flat plate. Repeat.

Once all the crepes are done, fold each one into four quarters.  Keep aside.

For the Beurre Suzette - orange sauce

5 tbsp sugar - or more to taste

In a large skillet melt the sugar and bring to a boil all the ingredients except the liquor. Cook this on a simmer for 30 minutes until it thickens and feels sticky.

Add the liquor. Place half the crepes into the pan and boil for 3 minutes.

Serve in plates. Repeat with the rest of the crepes.

The "sweeter" the butter in nature the tastier this dish is. Salted butter is my personal preference.

The best oranges to use are kinoo, narangi, clementine and mandarin.

A little tartness helps enhance the flavour of this recipe.

Flambe` the 3rd tablespoon of liquor if you wish to light up the pan. To do that you will need to heat the metal spoon, pour the liquor into it and light it. quickly pour the liquid over the skillet and it should alight. The already added liquor will catch the flame!

You must be careful while you do the flambe`.

1. Measure the liquor our in a glass. DO NOT pour directly from the bottle.

2. Stand away from the pan. Do not try this with young children in the room.

3. Keep a lid handy to cover the pan in an emergency.

Posted by Niloufer's Kitchen at 11:39