Quinoa Khichri
Khichri, Khichdi, and Khichuri are derived from a Sanskrit word simply meaning "rice and lentil".
It has many variations and is popularly referred to as a comfort food. The texture is generally wet rather than dry, similar to a risotto. It is often seasoned with clarified butter or pure ghee. From the Greeks to the Persians, it was a favourite of the Mughal Emperor Akbar!
The Egyptians and their neighbours add vegetables to it, while the Indian sub-continent likes to serve it with yoghurt or other forms of curry. The people of Maharashtra living on the Arabian Sea, however, tend to add shrimp to their Khichri.
It is generally the simplest and healthiest form of solid food introduced to babies. It is affordable as a self-contained complete meal, making it the food of the masses. Many cultures dedicate a meal of khichri during their week of wedding festivities. 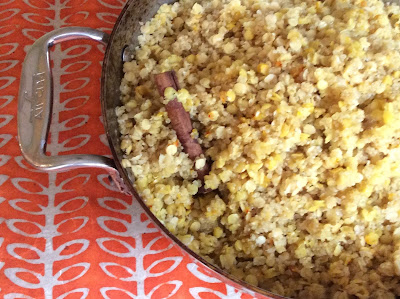 Gluten-free people will appreciate the quinoa khichri. It has lots of nutrients and digests easily.

salt to taste
Add 3 cups of chicken or vegetable broth and bring this to a boil. Lower the flame and allow this to cook until the liquid is reduced and you can see the top of the grains.
Simmer for 30 minutes, covered. Fluff with a fork and serve.
TipsSoaking them overnight before cooking takes away the tad of bitterness the outer shell of this ancient grain can sometimes have. If you do not have the time, soak them for a few hours and drain.
The stock may have enough salt already, but add a little first.
If desired, season with black peppercorns, cloves, bay leaf, and crushed fried onions, just as you would for khichri.
If you want to eat this as a side to a grilled piece of chicken or fish, add a touch of lemon zest, orange zest, finely chopped parsley or any favourite fresh herb for flavour.
Alternately, add chopped black or green olives, mushrooms, nuts; the choices are endless.


Eat this with a yogurt based kudhee if you wish or other foods like Patio and Sas.
Healthy eating!!

For more on Parsi Food recipes and its origin read my cookbooks
The Art of Parsi Cooking; reviving an ancient cuisine and The World of Parsi Cooking Food Across Borders.

btw, i made the quinoa kichdi and it was fantastic! Even better than regular! thanks Niloufer

Posted by Niloufer's Kitchen at 06:03