These "Scotch eggs" are a delicious variation on the classic, but even the classic may have its roots in India! Although London’s Fortnum & Mason claims they invented the Scotch egg in the 1730’s, and other sources say it came about in 19th century Yorkshire, it is now believed that this English version is based upon the Indian nargisi kofta, a rich Mughlai dish which has many similarities with the Scotch egg.
While variations of these are relished in the cuisines of Belgium, Netherlands, Italy and the USA, the most well-known version consists of a hard-boiled egg covered in sausage meat and deep fried with a crust of breadcrumbs. They are generally served cold for picnics, etc.
The Parsi-style Scotch egg is even more delightful in my opinion; wrapped in coconut and coriander chutney, covered with a layer of mashed potatoes, and fried to a golden brown. 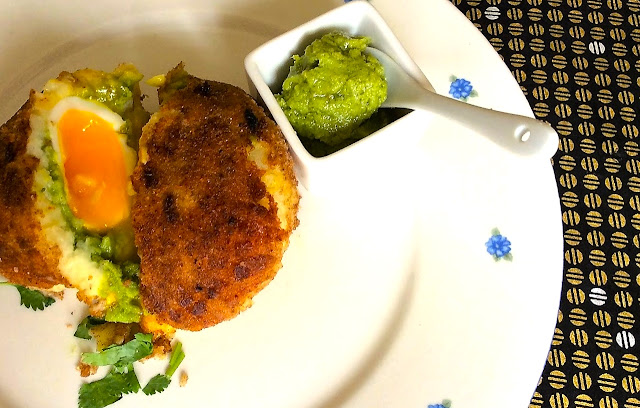 Divide the mashed potatoes and the chutney into 6 equal parts.

Beat the egg and water to prepare the egg wash. Heat the oil in a shallow frying pan.
Dip each prepared Scotch egg into the egg wash and gently lower into the oil with a spoon. Keep rolling it over each side gently with the help of the back of a spoon. Remove when golden brown. Serve warm.

It is easier to prepare this when the mashed potatoes and chutney are chilled overnight.


The chutney should be thick and not too soft.

The mashed potatoes should be smooth and thick, not lumpy, or creamy, and properly seasoned with butter, salt and a dash of milk or cream as needed.

While not traditional, dip the Scotch eggs into a fine breadcrumb mixture after the egg wash to hold shape better while turning it in the frying pan.

To keep the patties smaller and make more of them, slice the boiled eggs in half lengthwise before preparing them.


My published cookbooks are available for sale through myself and on amazon.

Posted by Niloufer's Kitchen at 08:00