Seekh kebabs are indigenous to Pakistan's northern half, extending into northern India as well. Originally, the meat was ground on a stone with another stone, much like the mortar and pestle or a masala no pathar (spice-stone), until it was completely macerated to a fine pulp, using water, ghee or butter, milk or cream to help it along, so the final product is soft. Once cooked, it should almost melt in the mouth, in spite of it being a meat dish.

Besides the method of preparing the meat, the result is just as dependent on the cooking method. Tandoors and open fires are the best options. While the aromas of the coal enhance the taste, the high temperature and quick cooking time help caramelise the outside of the kebabs to perfection.

The metal skewer itself emits enough heat within the kebab to cook the meat while keeping it soft and pinkish. The blazing heat from the outside is meant to crisp and caramelise just the outer kebab, forming almost a "skin" to keep the kebab together. The true art of a good seekh kebab is how well one manages to skewer it on the seekh; the thinner you can keep the kebab, the faster it will cook, and the softer and moister the end result.

There are plenty of types of kebabs that can be described as the old traditional food of the Persians, Indians, Pakistanis, Afghanis, Turks, and the Middle East regions of the world. The kebab, commonly prepared and mainly considered a timeless street food, continues to be just as popular to date. From food trucks to cafes, fine dining and hotel restaurants, everyone seems to have it on their menu. The choice of herbs and spices as well as the shape and size mainly define the 'type' of kebab it is. Kebabs can be made up of any kind of meat; chicken, vegetables, and even paneer or cottage cheese. While the meat kebab can be either minced or cut into pieces as a whole, the vegetable and paneer kebabs are generally cubed and threaded on skewers. 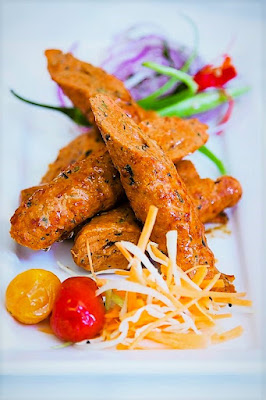 This particular kebab is named after the tool used for their preparation—the skewer or "seekh".

Transfer to a working bowl and chill for a few hours, or until chilled.
Mix it well and divide it into 50 equal parts. Wet your hands and skewer it up.
Taking a wooden spoon with a rounded drum stick like handle, working around the'stick' can be your skewer. Preparing this one at a time, remove the kebab from the spoon onto the tray lined with parchment. Keep it chilled until ready to cook.
To start off, make your griddle or skillet screaming hot. Add a spoon of canola oil or ghee. Place each kebab carefully, ensuring they are not touching the next one. Cook it over a high heat. Turn it after a minute, being very gentle. It will cook very quickly. Cover and reduce heat once both sides are nicely browned. Cook for another 3 minutes. Eat it with warm naan, a fresh salad made up of sliced onions, tomatoes, and a date and tamarind chutney, green coconut chutney, and a squeeze of lemon. Do not overcook them as they will get harder by the minute.
Tips

The length of the kebab can vary, this recipe is for fifty of about 18cm/ 7-inch long.

Chill the kebab mixture before trying to skewer it. This helps it stick easier.
Keep it as thin as possible; the thinner they are, the faster they will cook, leaving the meat moist and deliciously soft-'moo-ly-em' is the word which describes it best!

If you have skewers, you can leave the kebabs on to chill and use them later on a grill or bbq.
Use the fresh coriander with the young, soft stalks which are flavourful.
Using medium to lean mince generally is the best. However, using completely lean mince can make the kebabs dry, especially if you use them in a hot tandoor or barbecue grill.
The end result: caramelised from the outside and creamy-soft from the inside.

My published cookbooks are available for sale through myself and on Amazon. 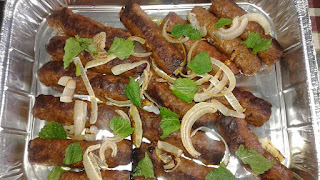 🎉Thank you Niloufer Mavalvala for the recipe....