Loving the Padrón pepper (commonly prepared as Tapas in Spain) I went looking for them. Not being successful in finding them locally, I settled for these colourful sweet peppers; creating this little sauce beneath to "dip" the cooked peppers in. It seems it was well received, and so I am sharing the recipe to be enjoyed by others.
Padrón peppers are grown in the northwest of Spain in the region of A Corua, Galicia, and are named after the area of Padrón. They are generally green in colour but can be yellow or red.
Shishito peppers are another delicious alternate. These are very similar and have a wonderful taste to them. You can prepare them exactly the same way. They are also green in colour but can also have a yellow hue.
A word of caution: while all these peppers are mild and have a touch of sweetness, you may always get one among them that is extremely hot and fiery! 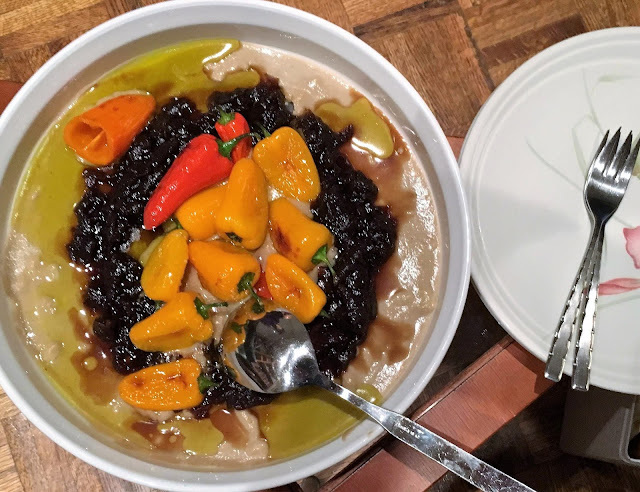 
For the dip base: pulverise all the ingredients -keeping it to a spreadable consistency.
1 1/2 cup parmesan cheese
1/2 cup sunflower seeds, toasted and crushed
1 clove of garlic
1/2 cup of garlic olive oil
touch of balsamic vinegar

Spread it in two, 10 inch flat dishes. Top it with a ring of  Onion Chutney or Onion Jam ~ store bought will do. You will need a cupful.

Then top this with the sizzling hot peppers, (recipe below) drizzled with olive oil and rock salt.
For the peppers
48 peppers
Olive oil
Rock salt
Heat a flat skillet. Add olive oil and drop in 1/4 of the peppers. Keeping the flame high, let them crackle and pop, giving the skillet a shake. Once they are blistered all over, cover, lower the heat to medium, and allow them to soften for 3 minutes at most. Remove them from the prepared dish with the dip. Repeat with the second, third, and fourth batches of peppers. Sprinkle immediately with rock salt. Serve


Tips
Keep the peppers washed and dried before frying them. If you wish, nuts like macadamia, pine, or walnuts would be a good substitute for the sunflower seeds. Adding an extra clove of garlic would be fine if you were using plain olive oil. I used a fig balsamic, which has a natural sweetness. Padron Peppers can still be used when available.